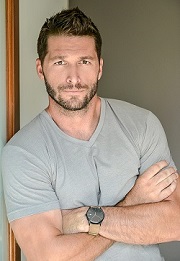 Brett is the new carpenter for TLC’s hit show Trading Spaces. He can previously be seen on Discovery Channel's hit show Treasure Quest (season 2) where he is the security & survival specialist for an elite team of treasure hunters on the trail of the Treasure of the Trinity.

He got his start in the entertainment business as a stuntman. Brett has done stunt work in feature films, TV shows, TV commercials and print adds. From 2013-2015 Brett hosted the TV Show New Home Source where he would travel the country educating viewers on new building methods and materials, energy efficiency and the future of home building.

In 2014, Brett founded the nonprofit Off The Grid International. OTGi builds clean water and sanitation systems in some of the most remote regions on the planet and also raises awareness for other nonprofits, mission oriented businesses and individuals who are doing amazing and sustainable work in humanitarian aid and environmental relief.

Brett is also a songwriter and guitarist and plays in a band in Austin, Texas with his brother Chase. "The Tutor Brothers" music can be found on iTunes and the music video "Fire Fly" is on their website.

Brett will be appearing on stage Friday and Saturday! 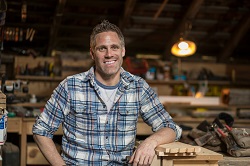 From a very young age, Jeff began building and creating with tools and scraps of just about anything he could get his hands on. “I have always tinkered. I spent most of my early days breaking things. Now my days are filled with fixing them. Funny how things work out!”
Jeff’s professional foray into carpentry began over twenty years ago as an apprentice for a historic home remodeler, where he honed his skills in the trade and gained a deep appreciation for the character, craftsmanship and beauty of historic dwellings. This blooming passion for designing, creating and building things, is what led Jeff to his chosen career path.

As an apprentice for a company that purchased antiquated properties on the verge of extinction, Jeff helped to rehabilitate them back to their original splendor of 100, or even 300, years past. Jeff was often in awe of the fine craftsmanship, attention to detail and heart these structures demanded of carpenters and, as a result, he came to demand this same level of manual investment and dedication of himself. Jeff took a hands-on approach to learning about construction and fine woodworking while putting the rest of his effort into absorbing all available information about his craft. To satisfy his natural tendency toward precision and excellence, Jeff strived to replicate the artisanship that he saw in these timeless homes with each and every project he adopted.

Jeff’s passion and dedication along with his natural ability to entertain those around him with humor, honesty and a smile, led him to the world of television. With many years and numerous shows under his belt for HGTV & DIY Network, including “Stone House Revival”, “Smart Home”, “I Hate My Bath”, “Good, Better, Best…”, “Spice Up My Kitchen”, “Ellen’s Design Challenge”, “Most Embarrassing Rooms..”, and many others, totaling well over 200 episodes. At the end of the day Jeff still remains grounded, a true carpenter, passionate about Character, Integrity and Quality.

Jeff has remained very hands on behind the scenes with his own company, SchoolHouse Woodworking, L.L.C. a custom woodworking company that delivers on their promise of excellence.
Jeff’s love for fixing things and his hard earned experience perfecting his craft has led him to independently accomplish the complete renovation of two historic Pennsylvania farmhouses, the current, of which, is the house of his dreams, a 250 year old Stone Farm House. He shares this labor of love with two children, a St. Bernard, and a handful of chickens.

Jeff will be appearing on stage Friday, Saturday, and Sunday!